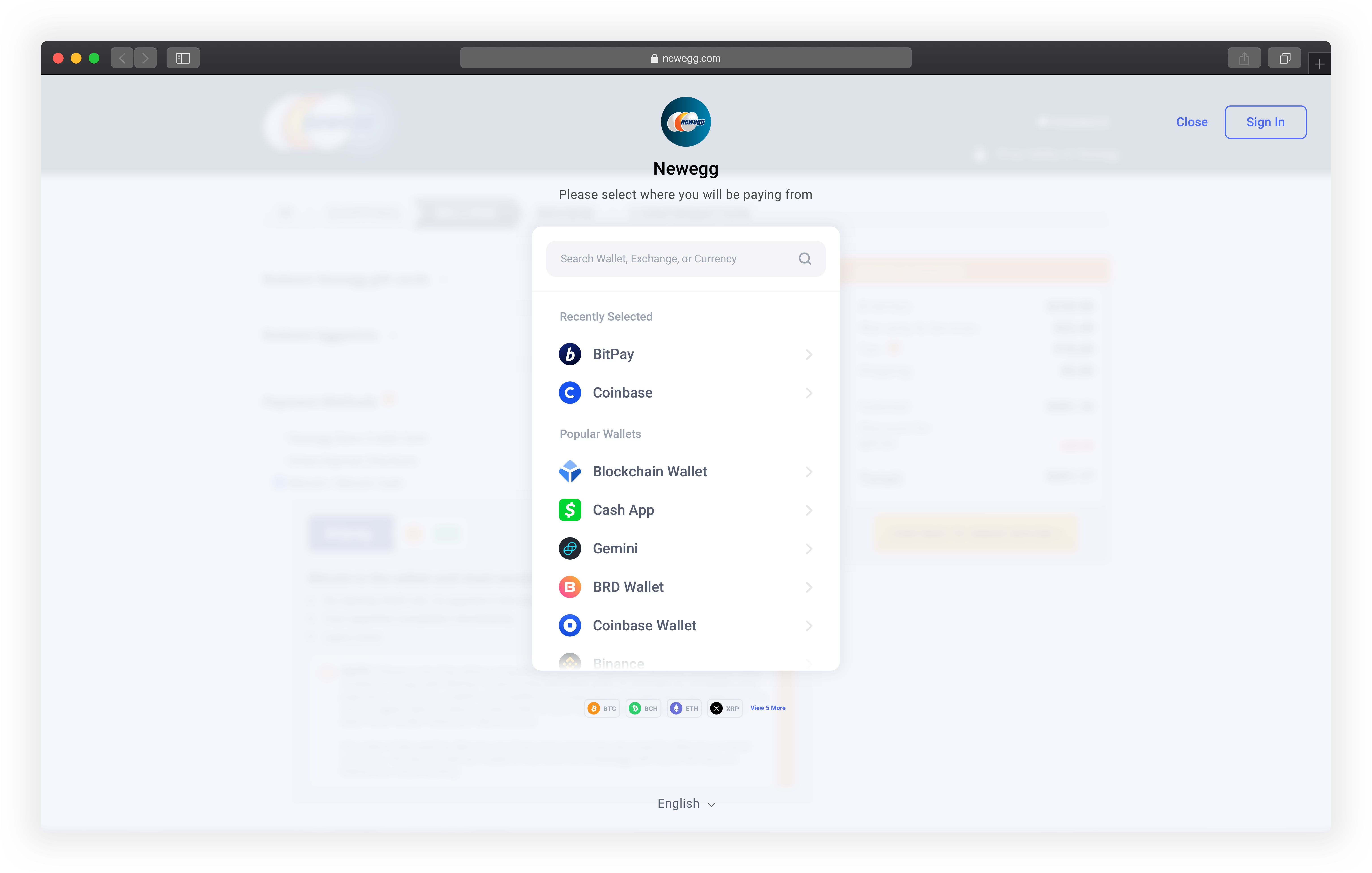 Up until recently, the Invoice was a fairly robust but rigid interface. It only needed to handle 2 currencies + a Payment Protocol link or QR code. Adding ETH and ERC20 token capability became the first time we had to support another payment method (Web3) where there was clear preference based on wallet.

It became clear after the launch of ETH that we needed a robust but elegant way to handle rapidly diverging feature sets.

In response to these problems, I created the Wallet Selection flow over the course of 2019, drawing inspiration from companies like Plaid, Mollie, and more. I finally had a chance to build and launch it in the beginning of 2020 as the company made P2P support a major initiative.

The solution was a relatively obvious one because of the following requirements:

However, because we now could now display custom behavior for any particular payment method selected, the design ended up unlocking a lot more capability than we initially set out to solve.

As soon as we enabled P2P payments via Wallet Selection, we finally had some insight into what was really going on with users' payment experiences. Pretty quickly, Coinbase rose to our 4th most popular payment method but with a ~30% error rate.

Basically, around 30% of Coinbase users were making some kind of error when paying due to the decoupled nature of P2P payments (push vs. pull). Common errors included mistakenly entering in a USD amount when withdrawing or a delayed transfer.

Coinbase's Connect API seemed like the perfect solution to address all our problems. By directly connecting to a user's account, we can initiate an exact withdrawal while still requiring manual authorization by the user (secure & precise).

The end result is an instant, errorless payment experience that bypasses the usual issues of dealing with crypto addresses and exact decimal amounts.

Guiding the experience with helpful info

To handle the common pitfalls with payments, the Info state is a simple way to chuck in helpful information. Even Payment Protocol enabled wallets like Bitcoin Core / ABC are a bit tricky to use when it comes to pasting in links.

In the case of Coinbase Wallet, the best way to ensure an accurate P2P payment experience is to scan the BIP21 URI. We often saw users manually entering into the wallet's send flow rather than scanning the QR code.

For other providers like Cash App, we use this state to prevent common errors we see. The graph above is demonstration of the effectiveness of this state. The inflection point around February 2020 is when we implemented an enhanced Payment Instructions state for Cash App. You can clearly see the uptrend in conversions (actually paying the Invoice) and an overall downtrend in payment errors (sending less or more money than needed).

Looking back on the data over the last year, it is definitely amazing what a simple change like this can do!

Figuring out what users want

As I mentioned previously, a large focus of ours was making sure we were capturing as much as we could about what our users wanted. If you can't find your wallet, I included a bailout option; clicking on "I don't see my wallet" let's the user submit a response.

We also keep track of what people are searching so we can preemptively investigate a payment method before a request.

Bringing seamless payments to others

The screens above are a sneak peak of more direct integrations coming soon to the invoice. MetaMask is already a supported wallet but the above is an example of the in-browser "connection pending" UI.

Connect to MetaMask
Authorize BitPay to connect to your Web3 wallet to pay.

Connect your Wallet
Scan the QR code below with your Argent app to continue.

Connect your Wallet
Scan the QR code below with your Coinbase Wallet app to continue.

Connect to Ledger
Plug in your device and make sure Browser Support is enabled.

Connect to Trezor
Plug in your device and make sure Browser Support is enabled.